VISIT A SOLDIER is a program that provides its participants with a unique opportunity to explore Ukrainian identity, cultural heritage, and legacy by visiting Ukrainian veterans and their families, spending time together, and sharing values, interests and experiences.

VISIT A SOLDIER started in April 2015, when Ukraine War Amps team visited ADOPT A SOLDIER beneficiaries all over Ukraine to make our amazing long lasting connections! This program is a hub where you can meet Ukrainian veterans, make new friends, and discover new Ukraine emerging from the ashes of war.

Long lasting memories, unique experiences, relationships with veterans are staples of VISIT A SOLDIER program! It is an absolutely breathtaking opportunity that is only available with Ukraine War Amps! 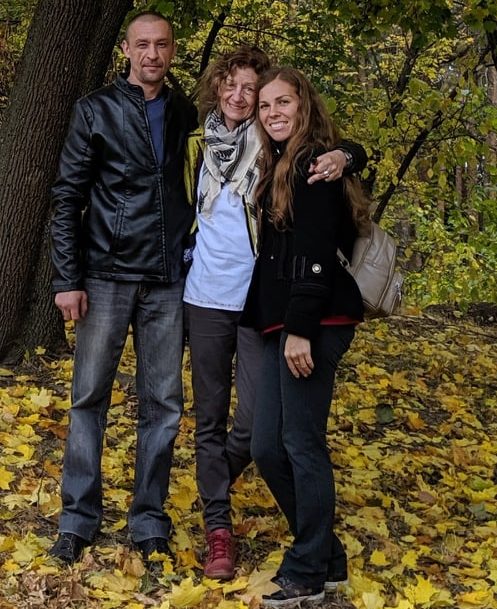 Kathryn has visited Ukraine multiple times since 2015 and, through Visit a Soldier, has become deeply involved in the lives of the soldiers she has adopted.

A telemetry nurse from Livermore, Maine, she has been deeply moved by the senseless waste of the war and the bravery, strength and honesty of those who have fought to defend their homeland.

“When Visit a Soldier program started, I immediately began visiting wounded soldiers and their families as a guest in their homes,” she says.

Among the soldiers she is most proud to help is one who was taken prisoner after the horrible battle for Donetsk airport in 2014.

“He was tortured, humiliated, and finally traded back to his family,” Kathryn recounts. “When I first met him in 2016, he was a shell of a man, and his mother, wife and daughter were all so sad.

“When I held his mother without saying anything, little did I know a big relationship had begun. Every time I’m in Ukraine I visit this family. The changes have been amazing. Every time, Vadym stood a little straighter, and began to hold up his head,” Kathryn says.

The family has from a two-room village house with no running water to a new house.

“Last year, I was a guest in their new lovely home in a town!” Kathryn says. “That was the very first time I saw his wife smile and heard him laugh!”

David Houghtaling, 67, is a Chicago-area insurance salesman with no Ukrainian heritage but a lifelong interest in Eastern Europe.

David has made a few trips to Ukraine to meet some of the many families he’s helped. His annual donations are split into about $100 per family.

In 2018, David visited first grader Artemko Kyrylyuk at his military academy in Kyiv. He stood in front of the class and shook the hand of the young cadet, who’s father, Oleksandr, gave his life for Ukraine. The experience brought tears to his eyes.

David appreciates that 100% of his donations go directly to the families, since UWA is a completely volunteer organization.

“I have complete faith in where the money is going,” he says. “I know that it gets applied, and I always say to myself, ‘That’s where the rubber meets the road.’”

Consider joining David in supporting these brave and suffering families.